What is male pattern baldness?

Up to 95% of men can blame hair loss on male pattern baldness or androgenetic alopecia, which is a condition that causes men to lose their hair due to inherited genes from their parents. Men can lose their hair from as early as their teenage years. 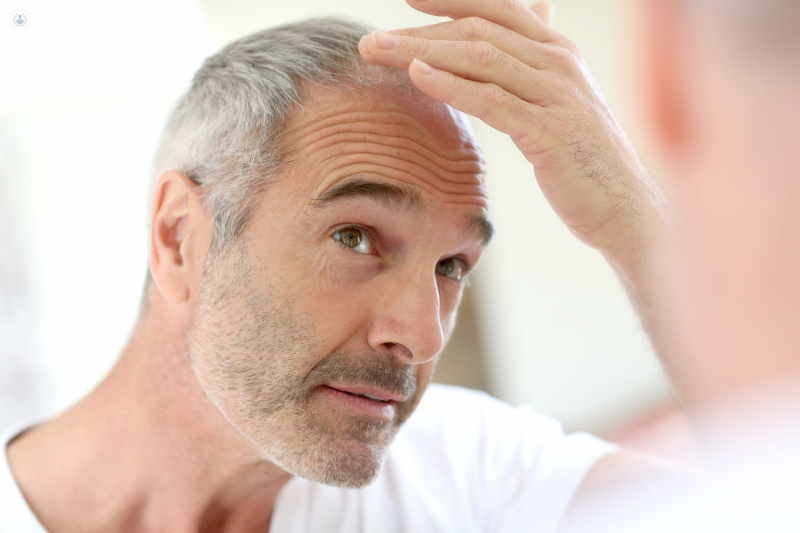 How is male pattern baldness diagnosed?

MPB is usually diagnosed by examining the pattern of hair loss, any family history of hair loss and the medical history of the patient. A dermatologist can examine the scalp using a densitometer to look at the hair follicles and advice you on the best course of treatment. They may also use a hair loss chart called the Norwood Scale to compare the extent of the hair loss in order to measure the severity of the condition.

Can male pattern baldness be prevented?

As male pattern baldness is genetic, it can’t be prevented, but certain measures can be taken to delay the onset and to keep hair follicles as healthy as possible, such giving up smoking and following a healthy and balanced diet with more omega 3 and zinc.

How can male pattern baldness be treated?

There have been many recent developments to stop or slow down the progression of hair loss or to replace hair. Certain medications such as Minoxidil can slow down MPB, but once the medication is stopped, the hair will continue to fall out.

Finasteride, another form of medication has helped men to regrow new hair, but only for as long as the medication is used. Finasteride lowers DHT levels, the hormone that shrinks hair follicles and leads to baldness. Finasteride is more favourable and has proven more effective than Minoxidil as a treatment option.

Another option is a hair transplant, such as the FUE hair transplant technique, which takes hair from the sides and back of the head and transplants it to the top. This hair will shed after the transplant but within 6 months, it will grow back and start to look natural.

Other options include using a wig that matches your own hair colour and texture and using hair styling products that can add volume to the hair that you have.

If you are concerned about your hair loss and would like advise on how best to tackle it, find a specialist near you who can give you guidance and support.

Any cookies that may not be particularly necessary for the website to function and is used specifically to collect user personal data via analytics, ads, other embedded contents are termed as non-necessary cookies. It is mandatory to procure user consent prior to running these cookies on your website.